A 69-year-old female with a long history of Grave’s ophthalmopathy was under routine follow-up when it was noted during a clinic visit that the amount of proptosis and lid retraction in her right eye had remarkably reduced. 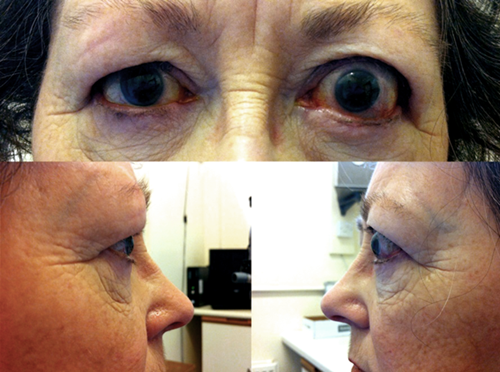 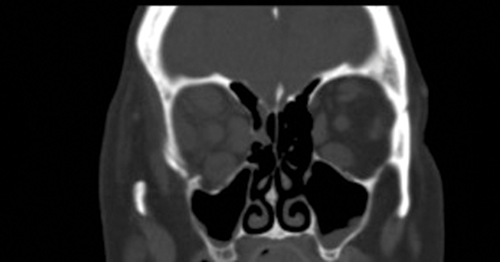 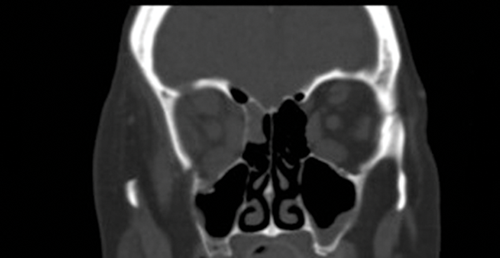 On further questioning, the patient volunteered that nine months prior she had a fall and sustained a heavy black eye with resultant soft tissue swelling. The eye was initially shut due to swelling but following resolution, she noted that her eye was less proptotic than before.

As this was an improvement in the appearance of her eye, she did not notify her clinicians about this change.

An MRI scan was ordered to assess both soft tissue and orbital contour and confirmed an interruption to the floor of the right orbit.

Muscle was not trapped in the defect. There was no worsening of her previous diplopia and no infraorbital anaesthesia.

There exist many techniques to surgically treat the aesthetic and exposure sequelae of thyroid eye disease [1,2]. They include a one, two, or three wall orbital wall decompression [3] depending on the severity of the exophthalmos. If the floor is part of decompression surgery, a strut is left medially and care is taken not to damage the infraorbital nerve.

To our knowledge, this is the first report of an orbital floor fracture that resulted in a symptomatic improvement for a patient with a thyroid proptosis. This case highlights the importance of identifying unexpected changes in clinical status and why clinicians should have as much of a suspicion for a ‘sudden improvement’ as we do a ‘sudden worsening’ – as this may represent a new clinical entity on a previously existing condition. 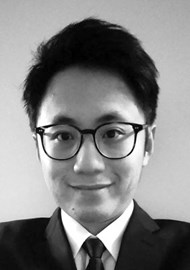