Trabeculectomy is the most commonly performed surgical procedure for glaucoma in the United Kingdom and worldwide. Modifications to the technique have been made since its introduction in 1963, perhaps the most significant being the adjunctive use of mitomycin-C (MMC), which has increased the longer-term intraocular pressure-lowering effect of the operation [1,2].

Use of MMC as an adjunct to trabeculectomy was initially described in 1983 by Chen [3], and has been adopted by the majority of surgeons since the late 1990s. However, the use of MMC can lead to significant and sometimes sight-threatening complications; poor surgical technique and higher concentrations of MMC increase this risk.

We present a case of a near miss where an incorrect concentration of MMC was prepared for intraoperative trabeculectomy use due to a pharmacy error.

A 48-year-old man attended the operating theatre at North Devon District Hospital (NDDH) to undergo a left eye trabeculectomy with 0.2mg/ml MMC under general anaesthesia. During anaesthetic induction, as per normal local practice, the syringe containing the MMC solution, which had been prepared that day by the hospital pharmacy, was checked by the surgical team. The hue of the solution was noted to be an unusually deep purple / blue. Via an immediate telephone conversation, the surgeon received an assurance by the lead pharmacist that the correct procedural process had been followed in preparing the MMC solution. Unconvinced, the surgeon asked him to attend the operating room in person to examine the MMC syringe. The pharmacist agreed the colour was of an unusually deep hue, but did not have concerns regarding its use. Still unconvinced, the surgeon decided not to proceed and the patient was recovered without having undergone the operation.

Subsequent investigation proved the actual concentration of the MMC solution to be 1.0mg/ml instead of the requested 0.2mg/ml.

The incident was reported immediately as a near miss on the local incident reporting system (DATIX) for further investigation and a yellow card Medicines and Healthcare products Regulatory Authority (MHRA) form was completed, which is devised for identifying and collecting information on adverse drug reactions, defective medicines and incidents involving medical devices etc.

MMC is manufactured in powder form for hospital use and delivered in glass vials containing 2mg, 10mg or 40mg MMC. The powder has a deep blue / purple colour. Locally, the 2mg vial is reserved for use during trabeculectomy surgery.

An investigation concluded that the error stemmed from a 10mg vial being selected instead of a 2mg vial. Reconstitution with 10ml sterile water created a solution of 1.0 mg/ml, which was five times the strength requested and would have accounted for the unusually deep blue / purple hue (Figures 1 and 2). 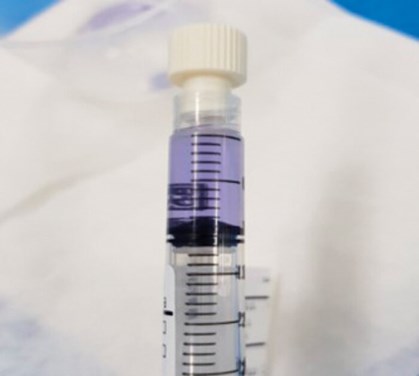 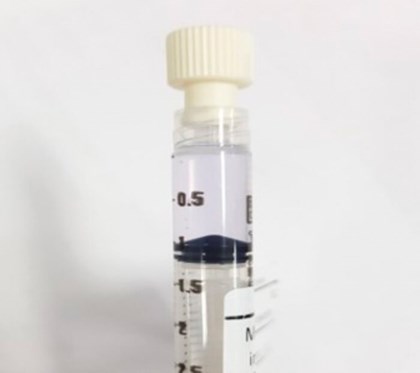 MMC has been widely adopted for its anti-scarring properties in order to improve the efficacy of trabeculectomy and glaucoma tube surgery, minimise re-growth after pterygium excision and maintain a patent fistula following nasolacrimal surgery [4,5,6].

In ophthalmic surgery it is used in concentrations ranging from 0.1mg/ml to 0.5mg/ml [6]. It is also used to treat non-ophthalmic cancers, e.g. bladder cancer, where concentrations are significantly higher, up to 40mg [7,8].

The requirement to prepare different concentrations of MMC solution according to its indication is a challenge to a pharmacy service charged with serving multiple specialties and it mandates robust preparation and verification procedures. This case exposed a weakness in the verification process of MMC preparation, which has since been corrected. The hospital IT system has also been updated to add a further layer of safety.