A 40-year-old Asian man presented to the Emergency Department with a one day history of sudden onset visual disturbance in his right eye. He complained of image distortion and noted that objects now appeared smaller. He also described a headache and pain over the right brow. Five weeks previously he had undergone surgery to his left eye in the same hospital for a penetrating injury which was now causing him pain. On more detailed questioning, it was evident that he had not been using his postoperative topical medication.

He had been diagnosed with sarcoidosis five years ago by his chest physician. At presentation, he reported no symptoms and signs consistent with tuberculosis (TB) and had no history of past TB infection or of contact with people with active TB. 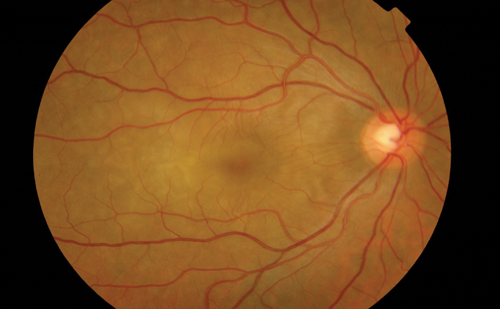 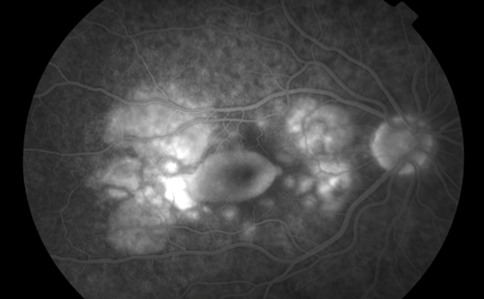 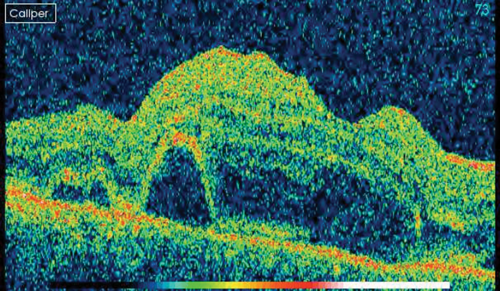 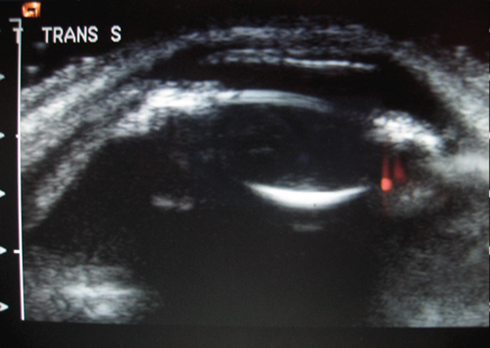 Figure 4: AS-UBM of the right eye.

Examination of the posterior segment was suggestive of a marked choroidal effusion; which was both confirmed and its extent documented using optical coherence tomography, fundus fluorescein angiography and anterior segment ultrasound biomicroscopy.

On the basis of these findings he was diagnosed with sarcoidosis-related ciliary body effusion. A HIV test performed was negative. Following advice by the medical retina team, this patient was started on treatment with topical steroids and mydriatics as well as systemic immunosuppressants.

Oral prednisolone (60mg) and cyclosporine (200mg bd) were commenced. He was also treated with dilating drops to the right eye and asked to restart maxidex eye drops to the left eye. He was reviewed two days later with an improvement in his symptoms, visual acuities and subsequently followed up jointly by the medical retina and glaucoma team.

We describe an unusual presentation of sarcoidosis-related ocular inflammation. This patient presented with secondary acute angle closure and induced myopia. The probable mechanism is that the sarcoidosis-related uveitis resulted in a severe ciliochoroidal effusion causing a forward rotation of the iris-lens diaphragm, leading to shallowing of the anterior chamber (angle closure) and a lens-induced myopic shift. It was possible to demonstrate the forward displacement of the iris-lens diaphragm with the aid of AS-UBM.

Choroidal effusion with induced myopia has been previously reported in association with both tuberculosis [1] and HIV infection [2]. These cases were successfully managed using topical steroids, aqueous suppressants and mydriatics. Mydriatics are used in the uncommon setting of secondary angle closure, which is most often due to anterior rotation of the iris-lens diaphragm, since they result in posterior movement of these structures, thereby opening up the drainage angle. Pilocarpine is a miotic agent which is used in the more common condition of primary angle closure (usually due to pupil block), causes further anterior rotation of the iris-lens diaphragm and is therefore contraindicated in secondary angle closure. Determining the aetiology of angle closure is therefore critical to determining the appropriate therapy. Yag laser peripheral iridotomies were not undertaken as this was deemed to be an inappropriate form of treatment in this case, due to the absence of pupil block and the presence of a presumed secondary angle closure.

Sympathetic ophthalmia was considered as a differential diagnosis, but disregarded as there was a lack of anterior uveitis, vitreal cells, and no focal choroidal ‘hot spots’, which was incompatible with this diagnosis. Furthermore, the injured eye showed no signs of inflammation.

Acute onset angle closure secondary to ciliary body effusion may be a presenting feature of sarcoidosis. This case reported herein demonstrates the need to consider a systemic cause when patients present with acute myopia and angle closure.