The timing of glaucoma filteration surgery during the course of chronic progressive glaucoma remains a contentious issue amongst glaucoma specialists. The vast majority support the use of maximal medical treatment initially to achieve the target pressure. Surgical procedures are only considered in those with failure to control the disease with medical treatment.

Long-term use of topical glaucoma therapy has been shown to cause toxic immunopathological changes in the ocular surface, though it is not known whether it is the active ingredient or the preservatives in most commonly used antiglaucoma medication, that cause this. We report a case where chronic use of multi-drug treatment for chronic open angle glaucoma caused severe ocular surface conjunctival cicatrisation, which prevented the patient from undergoing a trabeculectomy.

To the best of our knowledge such severe cicatricial change has not been reported in the literature before.

A 75-year-old Caucasian lady was diagnosed with primary open angle glaucoma 16 years ago. She was initially put on teoptic (2%, Carteolol, w/v solution, Spectrum Thea Laboratories, France) for control of intraocular pressure (IOP). Due to the progressive nature of her condition, she underwent a successful left trabeculectomy with use of antimetabolite. She was lost to follow-up for six years and on re-referral she was found to have a progressive glaucomatous optic neuropathy (Figure 1). A conservative medical approach was taken and she was initiated on prostaglandins (Lumigan; Bimatoprost-0.03%, Allergan Inc, Irvine, CA 92612), Cosopt (Timolol-0.5% and Dorzolamide-2%, Merck & Co Inc, NJ 0889, USA) and Alphagan (Brimonidine, 0.1%, Allergan Inc, Irvine, CA 92612) in quick succession.

Figure 2: Colour photos of both eyes. No obvious difference noted in the appearance. 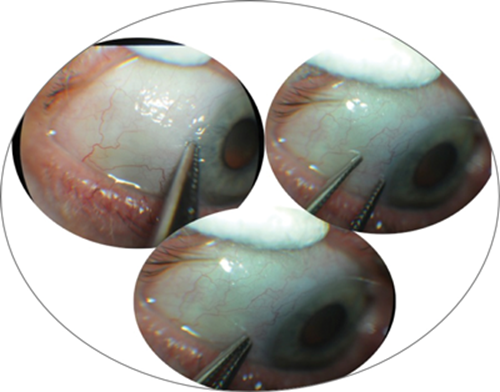 Figure 4: Right eye, conjunctiva being easily lifted off closer to the fornix.

She continued this treatment for nine years, before a decision was taken to carry out MMC-augmented trabeculectomy due to progressive visual field loss. Slit-lamp examination did not show any cicatrisation features, like loss of plica, forniceal shortening or symblepharon formation (Figure 2). Intraoperatively the conjunctiva was noted to be hyperemic, cicatrised and stuck down 360 degrees around the limbal margin for a distance of 5mm (Figures 3 and 4). Conjunctival dissection was not possible and filteration procedure was abandoned. A gentle cyclodiode therapy was carried out instead to reduce the intraocular pressure.

Long-term anti-glaucoma treatment may induce transient conjunctival changes related to allergy and toxicity and can also cause cicatrising disease. The cicatrisation process is characterised by abnormal binding of immunoglobulins to the basement membranes of the skin and mucous membranes [1]. Acutely, this causes complement activation and infiltration of the conjunctiva by neutrophils, macrophages and activated T lymphocytes [2]. This can lead to conjunctival and corneal scarring. Once this has occurred, the prognosis for visual rehabilitation is poor and, therefore, the prevention of disease progression is important [3].

Various medical therapies can have varied side-effects. The parasympathomimetics and sympathomimetics have been reported to trigger cicatricial pemphigoid [4-6]. In a study by Leng et al. [7] they showed a four fold increase in the expression of TGF-β1 in the group taking Latanoprost as compared to controls or those on Timolol and Dorzolamide which failed to produce significant changes in the inflammatory marker expression in the human tenon capsule fibroblasts. They also concluded that the fibroblasts in the chronic treatment group did not have phenotypic change but the proliferative abilities were altered and enhanced [7].

Human tenon capsule fibroblasts have the important task of synthesising the extracellular matrix (ECM) in the capsule and play a key role in conjunctival repair and scarring. Enhanced activity can cause increased ECM and this can severely affect the course of scarring of the filtering bleb. Guenoun at al. [8] in their in-vitro study evaluated the toxicity profile and inflammatory potential of various prostaglandins on the conjunctiva-derived epithelial cells. They concluded that benzalkonium chloride (BAK) was the most important factor having a direct stimulation of the inflammatory pathway [8]. BAK is the most commonly used preservative in topical ophthalmic preparation. It has been known to accumulate in the ocular tissue for prolonged periods and induce cellular toxicity and death [9].

The rational approach to the chronically medicated patient with inflammatory conjunctival signs and symptoms is to discontinue all medications, allowing the initial pathological process and the toxicity to resolve naturally.The same approach should apply to glaucoma patients, as there is already clear evidence that stopping the topical glaucoma therapy causes resolution of symptoms and stabilisation of the disease [10]. If the patient has early signs of drug-induced pemphigoid, early surgical therapy should be the treatment of choice in the form of trabeculectomy rather than alternative topical therapy, because all glaucoma topical medication has shown emergence of pemphigoid [10].

This case re-ignites the discussion of medical versus early surgical management for open angle glaucoma patients. It may be desirable to regularly check for signs of increased hyperemia, conjunctival cicatrisation or forniceal shortening to make a decision whether multi-drug medical management should be continued or trabeculectomy should be performed to avoid poor outcome and early bleb scarring.