A 24-year-old Caucasian girl reported to the eye clinic with the complaint of painless decreased vision in her right eye. She had no history of infectious disease, trauma, systemic malignancy or other systemic complaint. Her best corrected visual acuity was 20/40 in the right eye and 20/20 in the left eye. Pupils were round and reactive in both eyes without evidence of relative afferent pupillary defect in either eye. Biomicroscopy of the anterior segment was unremarkable.

Dilated fundus examination revealed normal findings in the left eye; in the right eye there was partial hemophthalmus, preretinal haemorrhage along the inferotemporal arcade and two vascular anomalies in the inferotemporal arcade and in the papillomacular bundle. Fundus fluorescein angiography (FFA) of the right eye showed rapid filling of vascular anomalies without leakage and with normal arteriovenous transit time (Figure 1). No intervening capillary plexus was noted. FFA of the left eye was normal. 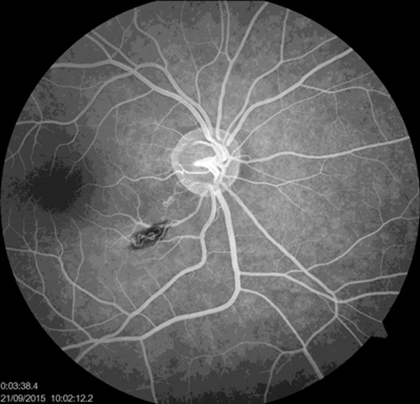 Based on the history and objective status we established a diagnosis – vitreous haemorrhage due to a retinal arteriovenous malformation (AVM) in the right eye, group 2 (direct arteriovenous communication without intervening arteriolar or capillary segments). Magnetic resonance imaging of the brain was unremarkable for intracranial AVMs or bony lesions. Blood investigations including complete blood count with erythrocyte sedimentation rate, platelet count, serum lipids, prothrombin / activated partial thromboplastin time, autoimmune markers and serum homocysteine were all within normal limits. 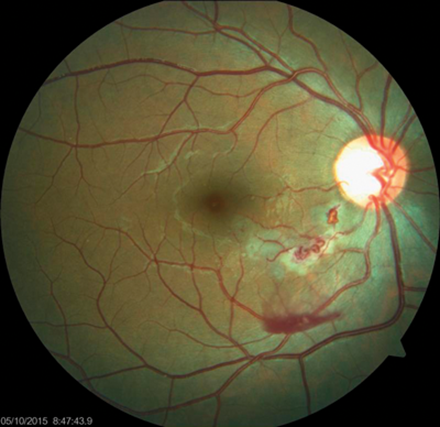 In view of vitreous haemorrhage it was decided to perform lasercoagulation of the vascular anomalies for the prevention of recurrent intravitreal haemorrhage. Bleeding from the AVM started again during performance of the lasercoagulation (Figure 2), but after additional pressure of the contact lens on the eye the bleeding was stopped. At the first evaluation one month after lasercoagulation, the hemophthalmus and preretinal haemorrhage had resolved remarkably, and visual acuity of the right eye had improved to a value of 20/20. Fundus fluorescein angiography showed a normal vascular network without anomalies. 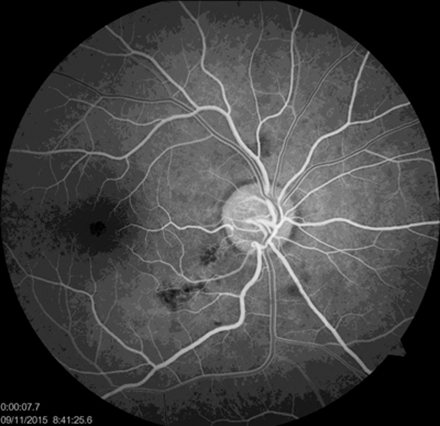 Retinal arteriovenous malformations are rare congenital developmental vascular anomalies and first described by Magnus in 1874 [1]. The most important clinical sign noted was marked arterial and venous dilatation associated with a tortuous pattern of vessels in a part of the retinal vascular system. The presentation ranges from small arteriovenous communications that are scarcely visible on retinal examination to pronounced dilatation of the entire retinal vascular system. Retinal AVMs most frequently occur in the superotemporal arcade (41%), papillomacular bundle (34%), and sometimes in nasal areas of the optic disk (6%) [2].

In 1973 Archer reviewed all published cases of congenital retinal AVMs. He divided the lesions into three groups [3]. Type 1 retinal AVM occurs when an arteriolar or abnormal capillary plexus is interposed between the major artery and vein. Type 2 retinal AVM is characterised by direct arteriovenous communication without intervening arteriolar or capillary segments. It is unusual to have an intracranial AVM associated with either a type 1 or 2 retinal AVM. Type 3 retinal AVMs appear as widespread retinal AVMs that exist morphologically as large-calibre convoluted vessels. These lesions of type 3 are frequently associated with AVM of the optic nerve, chiasm and cerebral cortex. In this case the patient had type 2 retinal AVM.

Most cases of retinal AVMs follow a benign course, without evidence of clinical or anatomical progression. So, uncomplicated AVMs are not thought to cause vision loss. However, various associated ocular complications have been reported, including central retinal vein occlusion, cystic degeneration in the retina, macular oedema, retinal ischaemia, vitreous haemorrhage, retinal haemorrhage from possible hyperdynamic flow through small-calibre vessels, and a ‘steal‘ phenomenon caused by increased venous pressure with decreased arterial pressure [4].