Paraproteinaemia: a patient with atypical corneal findings
By J Saldanha and N Hawksworth

A Bence Jones protein is a monoclonal globulin protein or immunoglobulin light chain found in the urine, with a molecular weight of 22-24 kDa [1]. Detection of Bence Jones protein may be suggestive of multiple myeloma or Waldenström’s macroglobulinemia.

Multiple myeloma (MM) is a B-cell malignancy characterised by the monoclonal proliferation of malignant plasma cells and osteolytic bone destruction. Ocular findings in MM are diverse and include hyperviscosity retinopathy, cysts of the ciliary body and orbital involvement [2]. Although corneal involvement is not common, it can be among the first manifestations of MM. 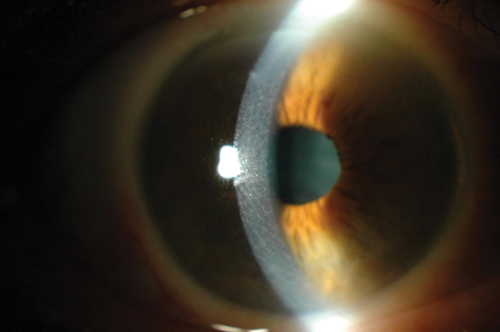 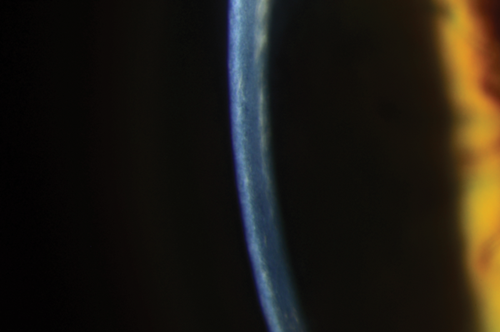 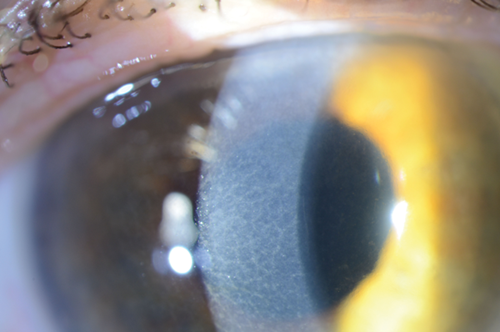 A 75-year-old gentleman was referred to the corneal clinic for persistent blurring of vision of 24 months duration. He had been noted to have an unusual corneal appearance, in a honey-comb pattern, limbus to limbus (Figure 1) at the time of referral to the eye clinic. He underwent sequential cataract surgery on each eye 12 months ago. His complaint of blurring was persistent post-op, even after he underwent YAG capsulotomy bilaterally. On examination his corneal changes had increased and did not fit into a particular pattern of dystrophy (Figures 2a and b). He was also being treated by the cardiologist for severe aortic stenosis. Due to the unusual corneal presentation serum protein electophoresis was sought and was positive for monoclonal paraprotein of the IgG Kappa type. Further urine test for Bence Jones protein was also positive. He was then referred to the haematologist for further management.

Burki first reported corneal changes in MM in 1958 [3]. Various corneal changes like crystalline and vortex keratopathy associated with MM have also been reported previously [4,5,6]. Our patient presented with an unusual corneal dystrophy like picture with persistent complaints of blurring of vision.

A similar pattern is seen in Meesman and Reis-bucklers dystrophy. Corneal vortex keratopathy has also been seen in patients with various metabolic diseases and in patients receiving amphiphillic cationic drugs (e.g. Amiodarone, hydroxychloroquine, clofazamine) [7]. Depending on the level of corneal involvement, patients can be surgically treated with superficial keratectomy, lamellar or penetrating keratoplasty [8]. We would like to highlight the importance of considering a diagnosis of MM in patients with unusual corneal deposits or changes of unknown aetiology.