Microcatheter in the vertebral artery as a cause of branched retinal artery occlusion?
By Rathin Pujari, Chuanyu Gao and Mohammed Haque

A 19-year-old male presented to eye casualty with a seven-day history of a ‘blurred patch’ in the left eye. The patient denied any other visual symptoms including flashes or floaters and there had been no change in visual symptoms in the last seven days. Past medical history was significant for hereditary haemorrhagic telangiectasia but there was no history of any past visual problems.

On further questions, the patient revealed that he had multiple treatments for haemorrhagic hereditary telengectasia due to a right temporal arteriovenous malformation including multiple embolisation attempts, cerebral haemorrhage, gamma knife treatment and cranioplasty with titanium plate insertion. There was no significant family history to note.

Optical coherence tomography (OCT) showed a band of hyperreflectivity in the inferior aspect of the left retina and there was a slight reduction in filling on the fundus fluorescien angiography (FFA) temporally without any leakage.

A diagnosis of branched retinal artery occlusion (BRAO) was made, and the patient was referred to the stroke team for a full workup.

Stroke team assessment resulted in a NIH Stroke Scale (NIHSS) score 1. CT head was unremarkable. CT angiogram of head and neck confirmed right arteriovenous malformation (AVM) but also indicated the presence of two tube like structures. On further discussion with multidisciplinary team (MDT) and consultation with the mother, it was determined that these were retained microcatheters. One was positioned at the left vertebral artery at the distal V1 segment extending through the basilar and right posterior cerebral artery into the nidus of an AVM. Another retained microcatheter was positioned at the left internal carotid artery extending through the right anterior cerebral and pericallosal arteries, and into a paracentral branch.

Further consultation with the mother and Great Ormond Street revealed that the retained microcatheters were from previous embolisation attempts of the AVM over 10 years ago during which the microcatheters had become stuck and were consequently cut to be left in place.

The microcatheters were deemed as the source of the emboli for the BRAO. Patient was started on two weeks of high dose aspirin. Clopidogrel 75mg once a day as a lifelong prophylactic measure was contraindicated due to right temporal lobe arterio-venous malformation. Vascular and neurosurgery MDTs both recommended no further interventions. 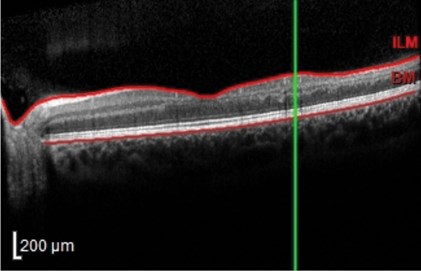 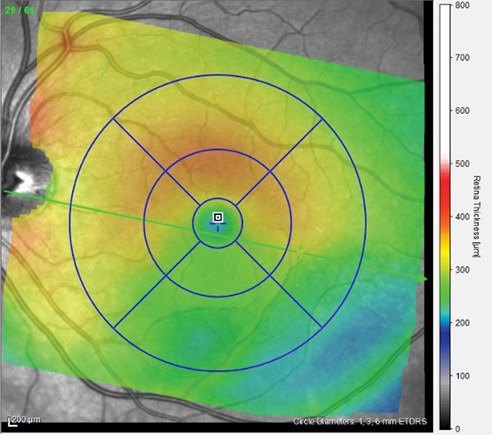 A clinical diagnosis can be made from a history which involves painless visual field defect corresponding to a pale area on the retina on fundal examination. Often emboli are visible clinically but unfortunately this was not the case as presented above. Investigations may include OCT and fundus angiogram. Acutely, an OCT would show hyperreflectivity in the inner retinal layers. However, in the longer term it is expected that retinal thinning and atrophy will ensue as seen in the case above (Figures 1 and 2).

Erythrocyte sedimentation rate (ESR) and C-reactive protein (CRP) are useful tests in investigating giant cell arteritis (GCA) as a cause, which must be ruled out especially in patients above 50 years of age and those with the cilioretinal artery variant of BRAO. BRAO of non-cilioretinal artery origin are unlikely to be due to GCA pathology.[1]

In case of a negative ESR and CRP, the most important aspect of management involves referral to the stroke team to further determine the aetiology of the BRAO and for stroke prevention. Generally, no stroke investigations are ordered by the ophthalmologist unless explicitly requested by the stroke team at the time of referral. This especially pertains to investigations such as MRI or carotid doppler which are done in specific instances. However, CT head scans will often be requested by referring ophthalmologists at the request of the stroke team.

Typically, patients should be prescribed high dose 300mg aspirin for two weeks and then lifelong clopidogrel 75mg for secondary prevention. Therefore, if an immediate review by stroke physician is not available ophthalmologists should consider prescribing an initial seven-day course of aspirin as per National Institute of Health & Care Excellence (NICE) guidelines unless the patient is already on aspirin or has other contraindications.

Long-term complications of BRAO include neovascularisation, which is treated with anti-VEGF injections. Most patients do, however, report visual improvement following permanent BRAO, with 74% of patients presenting with visual acuity (VA) of 6/12 or better initially, and 89% of those patients present with 6/12 or better vision on follow-up [2].