Is this a retinal detachment?
By Rathin Pujari and Mohammed Haque

Despite the help of allied health professionals in triaging and managing acute ophthalmic emergencies, eye casualty remains overburdened. Trainees at the beginning of their training often struggle to manage such busy clinics with varied presentations.

We present a case that presented as a retinal detachment as per the patient’s own perception but was diagnosed correctly in casualty after extensive history and examination. A careful history conducted at the start of the consultation may have resulted in a more focused examination and early diagnosis, thereby saving the trainee time in a busy clinic. 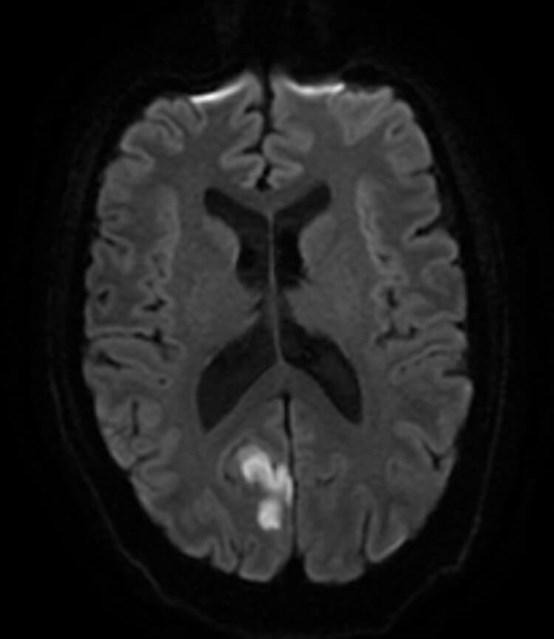 On further probing of the history the patient revealed that he had had a right haemorrhagic PVD 10 years previously. There was no other family history of significance, and past medical history was significant for the absence of cardiovascular risk factors.

The patient’s visual fields were examined using gross confrontational field testing. The examination revealed bilateral loss of vision in the left inferior nasal quadrant. It was deemed that the patient was more likely to have had a stroke with a left inferior quadrantanopia as the cause of his symptoms. The stroke team was informed, and a full work up was carried out.

A stroke team assessment gave the patient a NIHSS score of 1. A CT head and a MRI head was ordered. The CT head showed an extremely subtle decreased density in the right occipital lobe which was suggestive of a sub-acute infarct. MRI DWI imaging confirmed the lesion. Based on the above workup, the diagnosis was confirmed as sub-acute right occipital infarct which was the cause of the left homonymous inferior quadrantanopia field defect.

The case highlights some key learning points. Firstly, whilst due consideration must be given to the patient’s self-diagnosis, the clinician should strive to arrive at the diagnosis independently. The initial history was indicative for a left eye superior nasal detachment. However, many patients with bilateral homonymous field defects do not notice their visual defects bilaterally, which leads to GPs referring the patients to ophthalmology.

Secondly, a thorough history must be taken, and in this instance, questions specifically asking if any previous posterior vitreous detachment events occurred in the left eye or asking him to specifically check if the field defect was monocular would have been extremely helpful. In the same vein of thought, a thorough examination with a confrontational visual field test at the start of the examination could have been considered.

Often the patient’s primary concern after being informed of the diagnosis will be treatment and recovery period. Whilst it must be stressed that most treatment moving forward will be for the prevention of further related symptoms including large strokes, there can be around 50% improvement in the lesion itself. However, if any improvement is to take place this usually takes place within the first three to six months of the primary event and improvement thereafter is minimal [3].