A 46-year-old female farmer was referred by her local GP to the eye department with a history of gradually increasing upper eyelid lesion over 10 weeks, despite the patient being treated with topical and oral antibiotics.

The patient was a sheep farmer and had noticed some of her sheep having raised lesions around the nostrils. She got them seen by the local veterinary surgeon who gave her some antibiotic spray. She took the precaution of wearing gloves when handling the infected sheep and lambs.

A week later she noticed a small lump appear on her eyelid which gradually increased in size. It was not tender to touch. She went to her local family doctor, who initially thought it to be a meibomian cyst, but as it grew in size she was treated with both topical and oral antibiotics.

The patient was seen in the eye department where a non-tender raised ulcerating lesion was noted with no local lymph node enlargement. 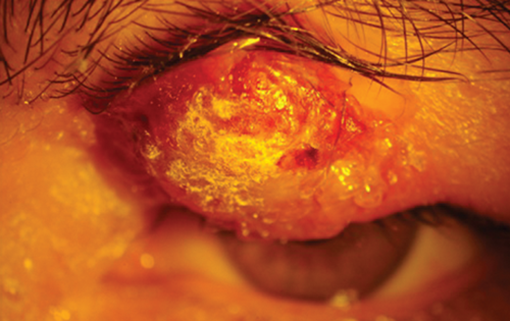 A photograph of the lesion was taken and after discussing with the patient, the lesion was excised.
The specimen was sent for histology. The patient was reviewed again in the department and there was no sign of recurrence.

The histology came back as Orf.

Orf is an exanthemous disease caused by parapox virus and occurs primarily in sheep and goats. It is a zoonotic disease but humans can contract it through direct contact with infected sheep. It causes a purulent appearing papule locally with generally no systemic symptoms.

The papule usually persists for seven to ten weeks and then spontaneously resolves. Serious damage could be inflicted to the eye if it is infected by Orf.

This was a rare presentation as it persisted for longer than normal and was causing the patient discomfort due to its position in the line of vision.