Matrix metalloproteinase-9 (MMP-9) and hypoxia inducible factor (HIF-2α) influence AS pathogenesis [2]. This report highlights the effect of apparently trivial trauma on the eye of a patient with AS and subtle signs of PXE. 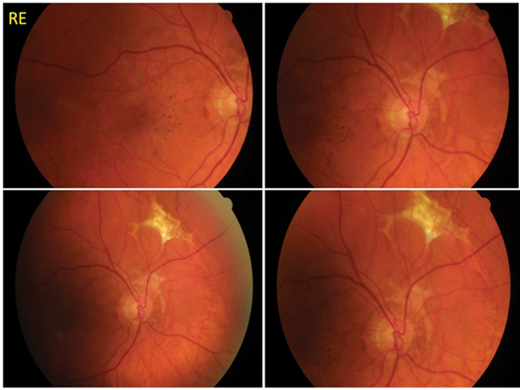 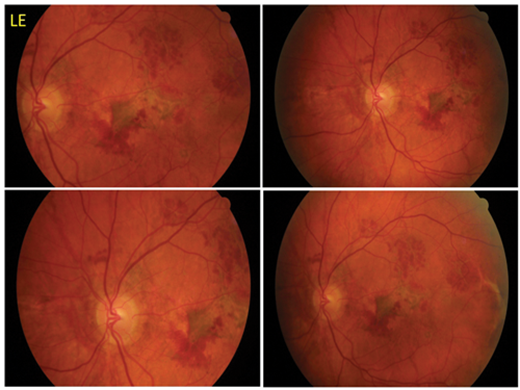 Figure 1a and b: Angioid streaks (AS) in a 46-year-old gentleman who presented 10 days following minor trauma to his LE with reduced vision. Funduscopy of (a) RE revealed crack-like dehiscences with peripheral scar tissue in superonasal retina and (b) LE showed foveal choroidal neovascular membrane with scarring and multiple choroidal ruptures that developed despite treatment with intravitreal injection of anti-VEGF bevacizumab (Avastin). Diagnosis of PXE was confirmed by skin biopsy.

A 46-year-old male presented to the eye casualty 10 days after accidental trauma involving a tree branch hitting his left eye. Four days later he developed a black eye and blurring of central vision. Visual acuity was 0.04 RE and 0.98 improving to 0.64 LE. Fundus examination revealed bilateral peripapillary AS with peripheral scar tissue in RE (Figure 1a) and multiple choroidal ruptures with intraretinal haemorrhages in LE (Figure 1b). The diagnosis appeared to be that of PXE associated AS.

Dermatology review confirmed PXE in the presence of mild skin involvement (yellowish appearance of dimpled skin over the lateral aspect of both axillae) and positive skin biopsy.

The diagnosis of AS was incidental at his delayed presentation post minor trauma. Associated features of AS including pattern dystrophy, drusen of the optic nerve, peripheral ‘comet tail’ lesions and autofluorescent perimacular white spots were not seen [3]. Dermatology review revealed an absence of abnormal skin around his neck or other flexures and a negative family history of PXE.

Complications of AS include CNVM and sub-retinal haemorrhage caused by traumatic choroidal rupture. A case of polypoidal choroidal vasculopathy, proposed to represent a variant of CNVM has also been reported [7]. Treatment options include:

Mrs Chitra Madhavan, Consultant Ophthalmologist in Medical Retina; Mrs Angie Smith, Senior Orthoptist for her excellent fundus imaging and, of course, the patient (TR) without whom this case report would not have been possible.