We report an uncommon clinical presentation to our ophthalmology unit which posed an initial diagnostic challenge.

An 87-year-old lady was referred to the Bristol Eye Hospital following a three day history of deteriorating right temple and periorbital swelling and pain, after minimal trauma involving a wardrobe.

Provisional diagnosis had been a secondary cellulitis at the site of trauma, which was treated with metronidazole and ceftriaxone at a local district hospital prior to referral.

There was no previous ophthalmic history of note and no ocular symptoms were reported. The patient had a 10 year history of chronic lymphocyti leukaemia (CLL).

On examination, the patient was pyrexial but otherwise systemically well. Visual acuity was 6/18 right and left (consistent with cataracts). Pupil reactions were normal, with no relative afferent pupillary defect (RAPD) and no deficit on Ishihara testing. There was no proptosis and eye movements were full.

An isolated raised plaque on the right temple at the site of trauma was noted; approximately 6cm diameter with central necrosis and ulceration and contiguous periorbital erythema and oedema of the skin (Figure 1). Ocular slit-lamp examination was unremarkable. 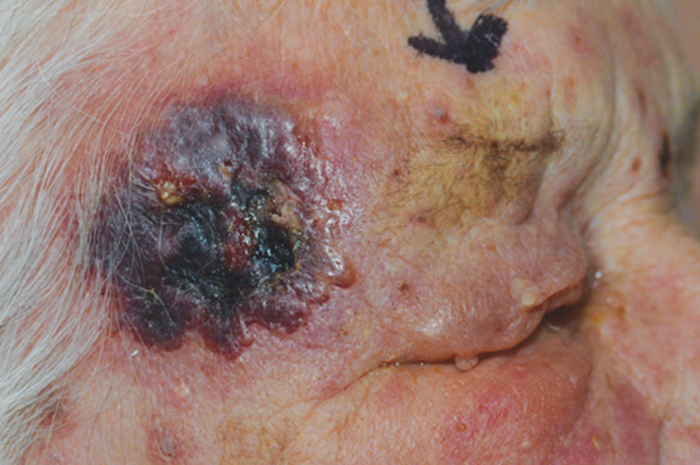 Multiple discrete cutaneous lesions began to develop over the face, chest, back and arms. The rash was suspected to be secondary to a drug reaction, particularly in the context of a previous allergy to penicillin (Figure 2). 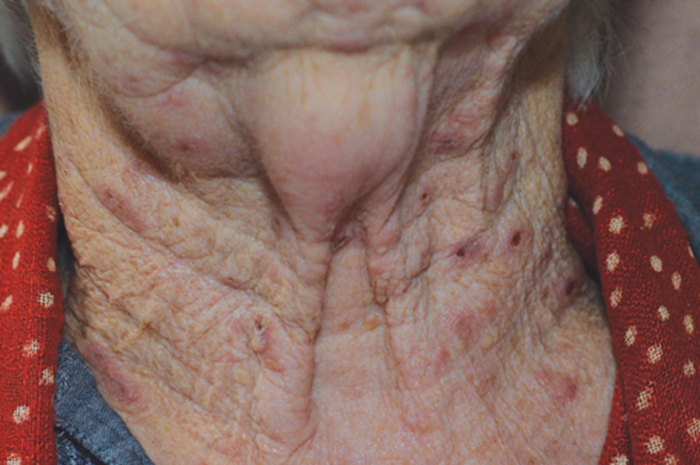 New skin lesions continued to appear on the patient’s trunk – treatment was changed to valacyclovir on advice of microbiology and she has since made a good recovery.

This case is an illustration of a common pathology presenting in an unusual way. Cutaneous leukaemic infiltrate due to CLL or fungal kerion were considered in the initial differential diagnoses.

The history of mechanical trauma triggering a localised zoster herpetic outbreak has been reported [4,5]. Reactivation may possibly be attributed to a localised disruption of cutaneous immunity and / or stimulation of the sensory nerves [6]. Depression of cell mediated immunity due to underlying CLL will have contributed to the progression to disseminated cutaneous involvement.