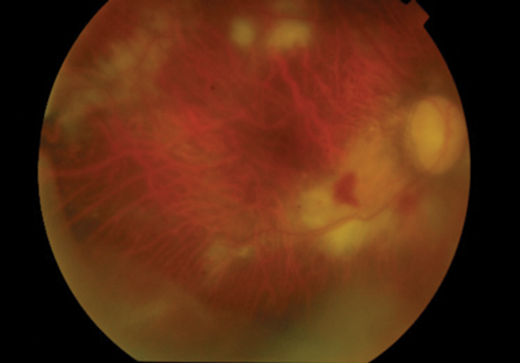 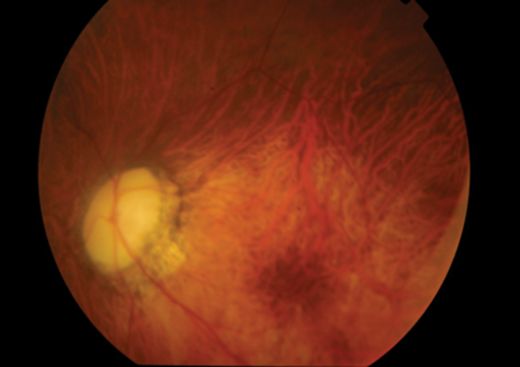 Figure 2: Fundus photograph of the left eye with no CMV retinitis; atrophic disc as a result of juvenile glaucoma.

A 29-year-old male patient with bilateral advanced juvenile glaucoma presented with a vitritis in the right eye four weeks after undergoing glaucoma surgery. The patient had an extensive ocular background of bilateral high myopia, poor left visual acuity (perception of light) from juvenile glaucoma, right failed trabeculectomy, right Baerveldt tube insertion and cataract surgery in March 2013 and a right macular haemorrhage in July 2013. He had a 2nd Baerveldt tube insertion in November 2013 with a 4mg dose of intravitreous triamcinolone acetonide (IVTA).

Four weeks following the surgery, the patient presented to eye casualty complaining of misty vision in the right eye with a visual acuity of 6/18 (preoperatively 6/9) and intraocular pressure (IOP) of 16. Keratic precipitates were noted on the endothelium of the cornea of the right eye with 3+ cells in the vitreous. Extensive areas of retinitis around vessels in the mid periphery were noted (Figure 1) and a clinical diagnosis of acute retinal necrosis most likely secondary to herpes simplex virus (HSV) was made. A diagnostic vitreous biopsy was arranged and the patient was started on 2g of valacyclovir three times a day and topical steroids. Polymerase chain reaction (PCR) was negative for HSV and varicella zoster virus (VZV) but positive for cytomegalovirus (CMV). Serologic tests for human immunodeficiency virus (HIV), CMV, toxoplasma and treponema were negative. There were no extraocular signs of CMV infection or pre-existing CMV disease. The valacyclovir was switched to valgancyclovir 900mg twice a day and an intravitreal foscarnet injection (2.4mg) was performed. The retinitis completely resolved within four weeks and visual acuity in the right eye returned to 6/12.

CMV retinitis is a common but serious opportunistic, sight-threatening ocular infection usually affecting immunocompromised patients [1]. CMV retinitis in immunocompetent patients has only been reported in a few cases [2]. Iatrogenic immunosuppression with chemotherapy or diseases compromising the immune system including acquired immune deficiency syndrome (AIDS) have been identified as important risk factors for developing CMV retinitis [1].

IVTA is commonly used for the treatment of patients with ocular inflammation [3].

The use of IVTA has been linked to some significant ocular side-effects such as cataract formation, bacterial endophthalmitis and transient corticosteroid induced glaucoma [4]. However, there are no reports of CMV retinitis developing post IVTA after glaucoma surgery.

Our patient developed unilateral CMV retinitis four weeks post IVTA after Baerveldt tube insertion for persistent raised intraocular pressures. Our patient received no systemic immunosuppressive treatment, had no medical problems that would have suppressed his immune system and there was no systemic CMV or HIV infection.

When compared to previous reported cases of CMV retinitis in immunocompetent patients the onset of symptomatic retinitis in our patient was quicker, developing within one month after IVTA compared to previous reported cases with an onset of symptoms ranging from three to seven months and mean onset of four months [5,6]. This could be due to our patient having the doubled risk factors of local immunosuppression with IVTA injection and glaucoma surgery.

In conclusion, as IVTA is routinely used after glaucoma surgery, it is important that clinicians are aware of the potential risk of the development of CMV retinitis following glaucoma surgery. Raised awareness of this significant complication of IVTA can aid prompt diagnosis and treatment, leading to a potentially better visual outcome.