Three hundred thousand cataract operations take place each year in the UK alone and each patient will receive a four week course of drops in order to cover them for any postoperative inflammation or infection. Accidental instillation of cyanoacrylate glue has occurred in a handful of case reports in the past, though this is the first time it has been described in a patient post cataract operation.

The reason for this is the similarity between the bottle caps of eye medications and glue as well poor eyesight, which patients, particularly postoperative patients, frequently endure. The glue industry needs to take action to distinguish their product from eye medication as due to the large number of patients needing eye drops this case of mistaken identity, with all its attendant problems, will keep on occurring.

A 70-year-old Caucasian patient attended eye casualty one day after routine cataract surgery to the left eye complaining of an inability to open the eye as well as significant pain. There was no pre-existing ophthalmic pathology, other than the cataract. There was no other medical history of note and the only medication the patient had taken was the routine postoperative Maxitrol (dexamethasone and neomycin) supplied after the surgery. There was no family, allergy or social history of note, other than the fact that the patient was a user of false nails, which are artificial nails glued over the top of the natural fingernails.

Examination demonstrated a left eye that was fused shut at the level of the eyelashes, with both upper and lower rows of eyelashes apparently stuck together. At this point the patient’s husband, who had administered the drop of Maxitrol immediately preceding the onset of this episode, admitted that he had mistakenly placed a drop of nail glue in the eye rather than the prescribed Maxitrol, having reached for the wrong bottle from the bedside table. 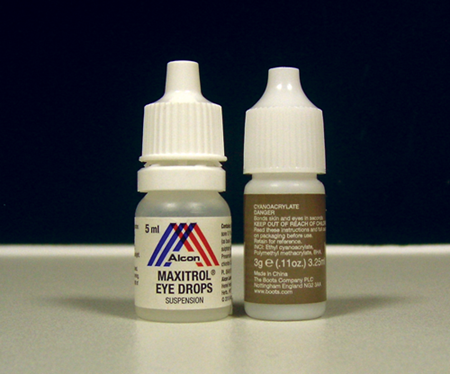 Figure 1: The bottle of Maxitrol eye drops alongside the bottle of cyanoacrylate nail glue.
Note the almost identical bottle caps.

After administration of oxybuprocaine local anaesthetic drops into the conjunctival sac through a gap in the opening of the eyelids the eyelashes were gently trimmed using scissors in order to free the eyelids. Visual acuity tested after this revealed an acuity of 6/9 and no other abnormality other than injection of the conjunctiva and some scanty punctate epithelial staining of the cornea. The patient was commenced on preservative free chloramphenicol drops qds (four times daily) for a week and dexamethasone preservative free minims qds for four weeks, as well as celluvisc ocular lubricant on a pro re nata (PRN) basis for a month.

The patient made a full and uneventful recovery with corrected visual acuity measured at 6/6; being 6/60 preoperatively. All drops were discontinued one month after presentation.

There are several published instances of cyanoacrylate glue, in this instance being marketed for use in affixing artificial nails, being instilled accidentally into the eye. This sometimes occurs due to user error, causing a jet of glue to spray into the eye [1], and sometimes due to the glue being mistaken for an ophthalmic medication [2,3]. Cyanoacrylate glue instilled directly into the eye does not seem to cause significant thermal, chemical or toxic injury. Indeed, use has been made of tissue glue in ophthalmology in order to induce a temporary tarsorrhaphy and close small corneal perforations [4,5].

It appears that the main danger of instilling glue into the eye involves the mechanical trauma of inexpert attempts to remove the glue by either patient or physician [2,6], with the main reported injury being a corneal abrasion. There are no reports of very serious injuries through inadvertent instillation of glue into the eye, although there is a reported case of a patient needing to be taken to theatre to have the eyelid separated under a general anaesthetic [7].

Each published case in which the patient accidentally administered the eye drop after confusing it with an ophthalmic medication mentions the similarity between the bottle caps of both the glue bottle and medication bottle [2,3,5,7]. Mention is made of the need for further discrimination in order to avoid such mistakes and an effort on behalf of the purveyors of glue to distinguish their bottle from medicines, but thus far nothing has changed, as can be seen in Figure 1. This is the first case report in which accidental administration of glue into the eye has occurred in a postoperative cataract patient, and it may be argued that if poor sight was a factor in choosing the wrong bottle then patients recovering from cataract operations may be in a uniquely high risk group. In this instance it was the patient’s husband, rather than the patient herself, that administered these drops, however.

In light of these previously published reports, as well as continual production of glue bottles shaped like medication bottles by the glue industry, pressure must be placed on the industry to distinguish their product in a manner much less likely to confuse patients or their relatives. Additionally, as these injuries are still taking place, a greater awareness of the best treatment method of simply separating the eyelashes and giving topical antibiotic cover with some lubricating drop for comfort is needed by eye professionals. Lastly, but perhaps more importantly, educating patients about the importance of not confusing their eye drop with another product and of keeping them separate is also useful.