An 84-year-old lady was admitted under the medical unit with confusion and poor vision. Her past medical history included atrial fibrillation (on digoxin), heart failure, polymyalgia rheumatica and hypothyroidism. She was not known to have any eye problems.

Her physical and neurological examinations were normal. Routine blood and urine tests were normal. She had an urgent CT scan which confirmed bilateral occipital infarction with hemorrhagic conversion. Aspirin was started by the medical team and she was referred to the ophthalmologist for reducing visual acuity.

On eye examination, her visual acuity was no perception of light in the right eye and +/- perception of light left eye. Ocular movement was full in all directions of gaze. Pupillary reflexes were normal and no nystagmas was elicited. She had significant cataract in both eyes and fundoscopy showed dry retinal macular degeneration. Her CT report was reviewed and final impression was made as bilateral cortical blindness with poor prognosis. 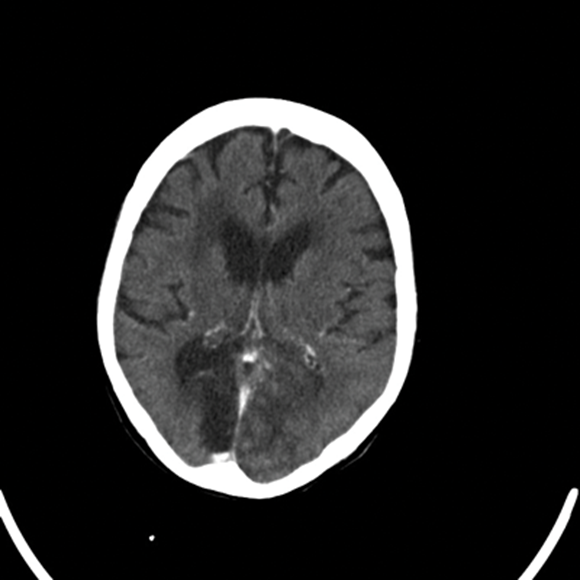 Cortical blindness is characterised by loss of visual sensations, loss of menace reflex, preservation of light and accommodation pupillary reflexes, a normal fundus and preservation of ocular movement [1].

The commonest cause for cortical blindness is reduced blood flow to the occipital area of brain supplied by posterior cerebral artery. It is either due to prolonged hypotension leading to hypoxia or emboli dislodged from heart or vertebral circulation. Therefore, ischaemic stroke, cardiac surgery and cerebral or vertebral angiography are commonly associated with transient or permanent cortical blindness [7]. Other systemic aetiologies include central nervous system infection, uraemia, hypoglycaemia, pulmonary embolus, irradiation, carbon monoxide poisoning, eclampsia and pre-eclampsia in pregnancy and neoplasm [2,3].

Several case reports have been found to describe cortical blindness associated with Anton syndrome [4,5,6]. But in our case the patient was complaining of poor vision.

A diagnosis of cortical blindness should be kept in mind in an elderly patient with visual deterioration. CT scan is important to differentiate between hemorrhagic and neoplastic changes and very quick and easy to make the diagnosis. The prognosis of cortical blindness depends on age, severity and duration of symptoms and any other medical history [6]. Michael [7] mentioned that better visual outcome was observed in young patients (<40 years old), no history of hypertension and diabetes, no cognitive, language or memory impairment and cerebrovascular accident is not the causative factor. Our patient had very poor visual outcome due to old age and multiple cardiovascular risk factors.