Processed bovine pericardium is a lyophilised collagen sheet used as a surgical armamentarium. It renders the material antigenically inert with minimal inflammation [1]. Sclera patch pericardium graft (Tutopatch) is a collagenous membrane derived from solvent preserved, irradiated bovine pericardium [2] that has been utilised with glaucoma valve implants. To the best of our knowledge, this is the first reported case of bovine pericardial sclera patch graft-complicated anterior scleritis.

Subsequently, Molteno implant was performed with patch graft and the patient continued to be asymptomatic for a few years until she experienced left ocular irritation. On examination, left eye showed patent inferior and superior iridotomies with two clear tubes (Image C), two scleral patch grafts; the lateral one was more swollen with a diagnosis of patch graft complicated anterior scleritis. Topical steroid drops were initiated. One week later, symptoms improved and examination showed moderate inflammation overlying the scleral patch graft. She was then started on PO Prednisolone 10mg daily and continued to improve. Prednisolone tablets were tapered by 1mg every two weeks. Four months later, visual acuity (VA) was stable at CF (6/60 PH) with quiet eye (Image D) and IOP was 14mmhg. 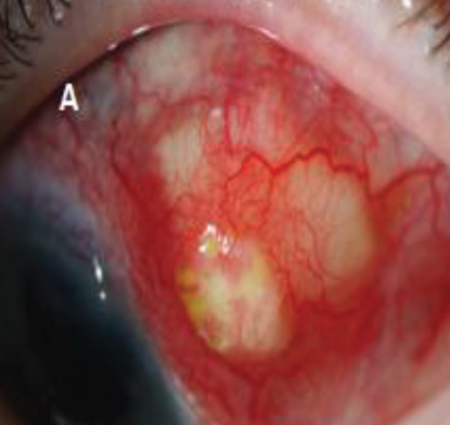 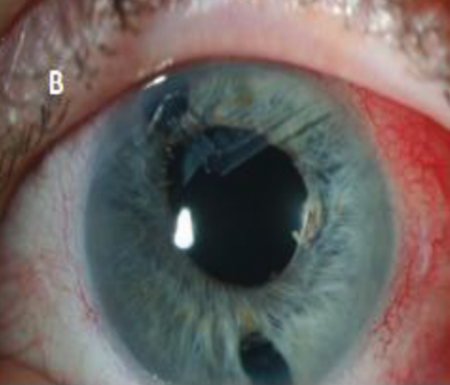 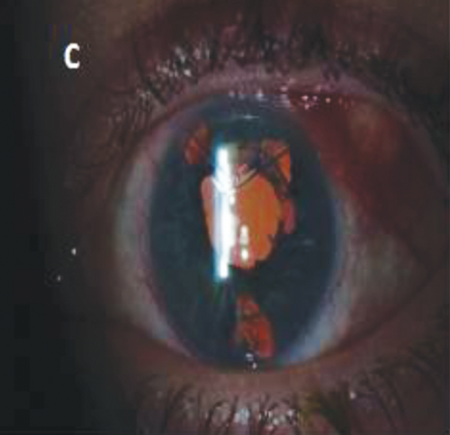 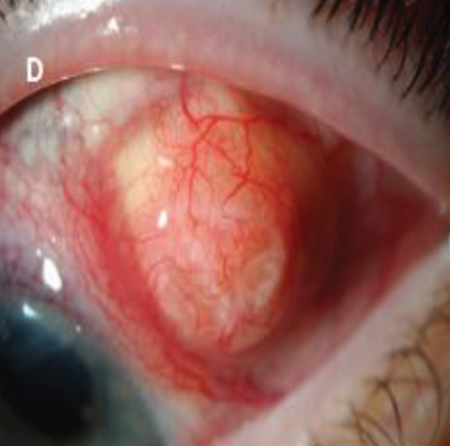 Complications associated with bovine pericardium patch graft were previously reported. To the best of our knowledge, this is the first reported delayed-onset bovine pericardium scleral patch graft complicated-scleritis with Ahmed valve implant. Although researchers have reported favourable results with pericardium, some evidence indicates that pericardial tissue may melt, resulting in conjunctival erosion and endophthalmitis [3]. Erosion of the silicone tube through the overlying conjunctiva may be associated with uveitis, scleritis, scleral necrosis, and epithelisation of the sclerostomy tract with tube hypermobility and leakage [4]. Nevertheless, our patient developed scleritis without preceding complications. The tube was in a good position with adequate conjunctival coverage and pericardial patch graft.

Surgeons usually place a layer of tissue over the anterior part of the tube. An alternative is a partial-thickness sclera flap [5]. Covering the tube reduces the risk of erosion through the overlying conjunctiva as well as the associated risk of late intraocular infection [6].

Bovine pericardium, an extracellular matrix, is a natural choice for xenographic implantation with exceptional inherent qualities [2]. It has been described for wrapping of hydroxyapatite implants [7], perforated corneal ulcers [1] and Ahmed devices [8]. In surgery, pericardial patch implant application with the drainage implants increases resistance over the leakage area and may overcome the hypotony. However, thinning and the conjunctival erosion reported are potentially serious complications of pericardium’s use; surgeons should, therefore, follow patients long-term to ensure early recognition of complications. Remarkably, in a retrospective review comparing the coverage of drainage implant tubes with donor sclera, dura, and pericardium, researchers found no difference in the rates of thinning or conjunctival erosion [4]. Moster and co-workers reported the placement of a double-thickness patch graft of pericardium and conjunctival advancement successfully addressed this complication [3]. Further, pericardium is opaque, which may be cosmetically unappealing to patients and may interfere with postoperative manipulations [9].

In 2009 King and Rotchford reported that the results of such an intervention might be unpredictable [10]; besides the use of a large patch graft has several disadvantages: it produces a bulky subconjunctival elevation, which may hinder conjunctival closure. Moreover, the use of a large patch makes it difficult to titrate flow precisely, making IOP outcomes unpredictable [10].

In conclusion, our case is unusual because of its delayed onset as well as the nature of the complication. Therefore, with the increased popularity of tube shunt surgery with grafts as a primary surgical option, an increase in the incidence of graft-related long-term postoperative complications are to be expected.