An unusual presentation of sarcoidosis
By Yusuf Mushtaq*, Asil Ibrahim*, and Mala Subash

A 45-year-old man presented to his local optometrist with a three-week history of severe intermittent left eye pain with associated blurred vision and tenderness around his left temple. Two days prior, he developed weakness on the left side of his face. He was referred to the local acute eye clinic where he was found to have a reduced left visual acuity of 6/12 compared to his right eye of 6/6 and bilateral ‘mutton fat’ keratic precipitates and anterior chamber inflammatory cells.

His intraocular pressure and retinal examination was normal in both eyes. His cranial nerve examination revealed a seventh nerve palsy and tenderness at his left temple. The patient was prescribed steroid and cyclopentolate eye drops for his bilateral acute anterior uveitis (AAU). 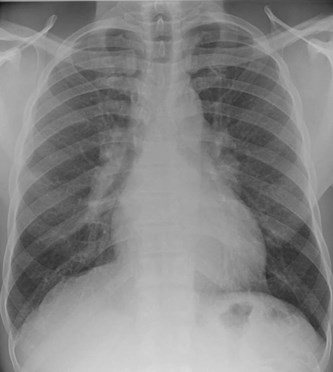 The patient’s uveitis responded well to topical treatment and his visual acuity returned to 6/5 bilaterally. He was referred to the respiratory team and a CT Thorax confirmed mediastinal and bilateral hilar lymphadenopathy (Figure 2). 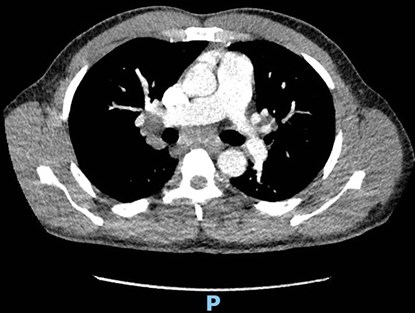 Interestingly, an endobronchial ultrasound (EBUS) was performed and the trans-bronchial aspirate showed no evidence of granulomas or malignancy. Tuberculosis culture and special stain for acid fast organisms was also negative. However, despite the EBUS report, the treating respiratory consultant still believes this patient has sarcoidosis, as negative aspirate results can sometimes occur.

Sarcoidosis is a chronic multi-systemic inflammatory disorder. It is characterised by non-caseating granulomas that infiltrate multiple organs. The commonly involved sites are the lungs and lymph nodes; however, extra-pulmonary manifestations can also occur. The eye is the third most frequently involved organ in sarcoidosis, with ocular involvement being the presenting symptom in approximately 20-30% of patients [1]. There are several key signs that may assist in the diagnosis of intraocular sarcoidosis as discussed in the International Workshop of Ocular Sarcoidosis (IWOS), such as trabecular meshwork nodules, vitreous opacities and multiple chorioretinal peripheral lesions [2]. However, the most common ocular manifestation of sarcoidosis is granulomatous anterior uveitis [3]. Neurological manifestations of sarcoidosis are rarer, with only 5% of cases having neurological involvement [4].

HWS is a rare and often under-recognised manifestation of sarcoidosis. In its complete form, it is characterised by a tetrad of anterior uveitis, parotid enlargement, facial nerve palsy and fever. It can also present in an incomplete form, with at least two symptoms present [5]. The presenting symptoms of this case corresponds to the incomplete form of HWS, with anterior uveitis and facial nerve palsy. It is possible he had undocumented fevers from his history.

The prevalence of HWS has been estimated to affect 4.1-5.6% of sarcoidosis patients [4]. It can often be missed or delayed due to the lack of typical symptomatology in HWS cases. For example, unilateral seventh nerve palsies, with no obvious cause, can be misdiagnosed initially as Bell’s palsy without taking a thorough history. Therefore, it is important to consider sarcoidosis in patients presenting with at least two of the defining signs of HWS in the initial consultation to ensure an accurate and timely diagnosis and management plan.