Acute retinal necrosis (ARN) is an uncommon, but serious and potentially blinding condition. ARN is characterised by panuveitis, occlusive vasculopathy and progressive peripheral necrotising retinitis. The diagnosis is clinical but confirmation is sought via aqueous and vitreous sampling. Varicella zoster (VZV) and herpes simplex (HSV) viruses are considered the principal pathogens. The role of Epstein-Barr virus (EBV) is still controversial and there are currently no recommendations for routine testing. We report a case of presumed EBV induced ARN supported by a rising vitreous viral load on repeat polymerase chain reaction (PCR). 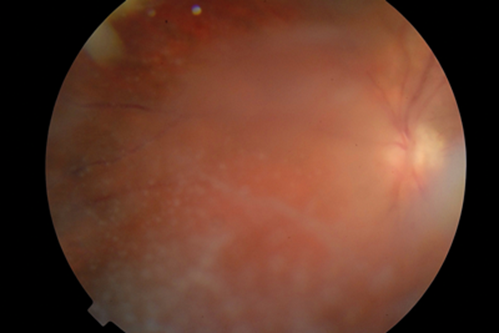 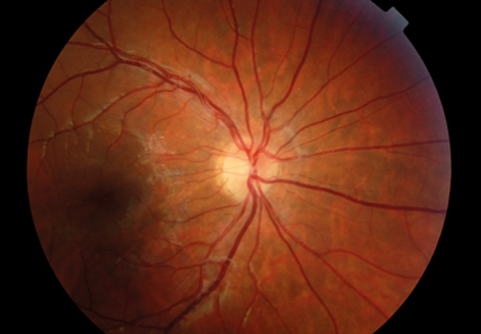 An 11-year-old girl presented with reduced vision in her right eye. She was receiving chemotherapy for leukaemia and was in remission. Best corrected visual acuity (BCVA) was right eye (RE) 6/9 and left eye (LE) 6/4. RE slit-lamp examination revealed moderate conjunctival hyperaemia, mild anterior chamber inflammation (cells 1+ and faint flare) and no keratic precipitates or hypopyon. On dilated RE fundoscopy there was vitritis (+2), retinal arteritis and isolated areas of necrotising retinitis in the periphery (Figure 1a). Intraocular pressure with Goldmann applanation tonometry was 16mmHg in both eyes. Left eye examination was otherwise unremarkable. Based on the standard diagnostic criteria of the American Uveitis Society [1], the clinical diagnosis of ARN was made. Chemotherapy was stopped in view of the potentially serious complication and intravenous ganciclovir was started.

She underwent vitreous biopsy which was negative for HSV, VZV and adenovirus but detected low levels of EBV and cytomegalovirus (CMV) on PCR. Serum serology (IgG) was also positive for EBV but negative for toxoplasmosis. The vitreous biopsy was repeated two weeks later as there was increase in ocular inflammation and PCR detected only rising levels of EBV (Table 1). She underwent vitrectomy two months later, due to persistent vitreous opacities, and once more the PCR confirmed only the presence of EBV. There were no concurrent symptoms of infectious mononucleosis. 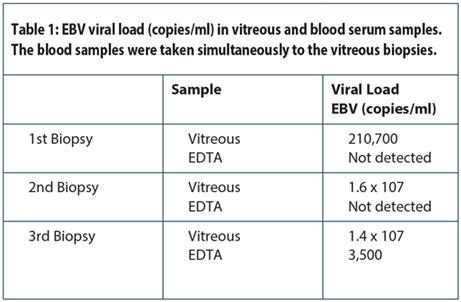 It was concluded that EBV was the most probable pathogen. The patient received intravenous ganciclovir for five days followed by oral valganciclovir for four months. At her latest follow-up, 18 months following presentation, the eye was quiet with BCVA 6/4 (Figure 1b).

Reports linking EBV to ARN started appearing in the 1980s, but with the absence of PCR there was no conclusive DNA evidence and serology was often simultaneously positive for other pathogens [2-3]. In a retrospective study of ARN patients, EBV was detected by PCR in 16.7% of cases but all were also positive for VZV [4]. A case of an immunocompetent child with EBV related ARN has been reported but association was based on serum serology and vitreous sampling was not performed [5].

The interpretation of PCR results for EBV is controversial, as EBV has been previously detected in up to 20% of cadaveric eyes [6]. The finding of a high viral load in our patient, which was noted to rise on subsequent samples, indicates that viral replication was taking place in the eye, suggesting a direct pathogenic role. EBV DNA was detected in the blood at a much later stage and at lower levels, which would make overflow from the circulation into the ocular tissues highly unlikely.

The treatment of ocular EBV is not well established due to the small number of cases. Currently most of the drugs that are active against EBV are agents that inhibit replication of other herpes viruses. Our patient responded well to the treatment and had a favourable outcome. This was also observed in the case of the child with EBV related ARN [5]. This suggests that EBV induced ARN is less severe than that seen with VZV and HSV.

To the best of our knowledge this is the first case report of presumed isolated EBV related ARN supported by vitreous PCR. We recommend that EBV be considered as a potential cause of ARN and tested for by PCR DNA analysis, especially with the availability of multiplex PCR. The role of this ubiquitous virus in ARN remains to be fully understood.