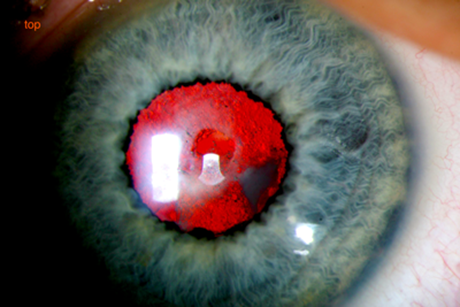 We report a case of a pseudophakic patient who underwent vitrectomy and posterior capsulectomy. In spite of good visual acuity and absence of floaters, he was unhappy with the visual outcome.

One week postoperatively, he presented with deteriorating vision. On examination, visual acuity in the right eye was 6/36. There was a mild vitreous haemorrhage. The intraocular lens (IOL) was in the correct position. Two weeks after surgery, the vitreous haemorrhage had cleared but he was still unhappy with his vision, although he felt his near vision was better than before surgery. On examination, visual acuity was 6/12 for distance, N6 for near. Refraction was -6.50/+1.00x20. The large capsulotomy allowed a clear fundus view. There were no vitreous cavity opacities and the retina was flat. Macular optical coherence tomography showed no abnormality.

Two weeks later, there was no improvement in his vision. It was felt that the reason for this was the loss of the pinhole effect caused by the preoperative small aperture in the posterior capsule. He previously had a wide depth of focus and this effect had been lost after surgery. The situation was explained to the patient and varifocals were prescribed. He was happy with the visual outcome.

The expected result of the vitrectomy and capsulectomy was an improvement of the visual function with the removal of floaters and enlargement of the posterior capsulotomy, allowing more light to reach the retina [1,2]. However, in this case, the patient developed poorer distance visual acuity and loss of depth of focus.

Depth of focus (DoF) is defined as the allowable range of retinal defocus before the perception of first noticeable blur occurs. Small pupils are known to increase the DoF by reducing the size of the blur circle on the retina, making the eye less able to detect any blur created by the target (pinhole effect) [3-6].

As the patient lost his ability to focus through a wider range of distances with monofocal glasses, he was struggling with his vision. Also his far point of clear vision got closer, rendering him more myopic (-4.00DS before surgery, -6.50/+1.00x20 after capsulectomy). Finally, his better near vision after the surgery was due to wearing his old glasses, prescription -4.00, having a near refraction of -4.00/+1.00x20.

It is important to tell patients about the possibility of losing depth of focus before capsulectomy or cataract surgery. Some patients may prefer to have a slightly decreased visual acuity rather than to lose depth of focus.