Following a routine pregnancy, a newly delivered baby boy, born at term, was found to have increased work of breathing, stridor and a left medial canthal swelling. The baby required 100% oxygen via a face mask to maintain oxygen saturations. After this, the neonatal team was unable to pass an NG tube through either nostril.

Leading from this, the team first conducted a CT scan of the nasal cavity and paranasal sinuses to look for structural pathology. This demonstrated bilateral membranous choanal atresia with enlargement of both lacrimal sacs. 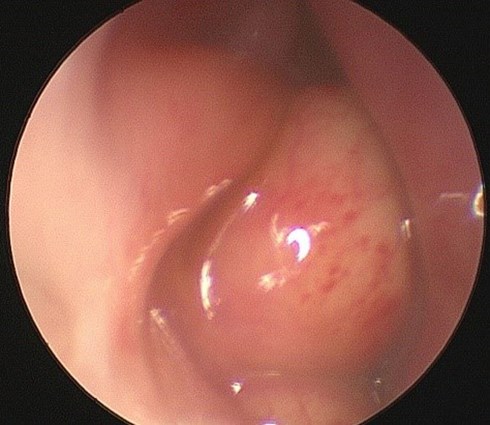 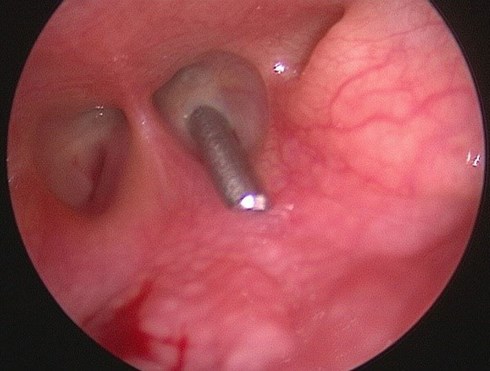 Choanal atresia is a congenital abnormality whereby the patency of the communication between the nasal cavity and nasopharynx is obstructed, leading to difficulty in breathing [1]. The incidence rate of choanal atresia has been reported at 0.82 per 10,000 births [2]. In some cases, choanal atresia may be a presentation of a syndromic condition with shared ophthalmic features. Such cases include CHARGE syndrome (Coloboma of Iris or Optic nerve, Heart defects, choanal Atresia, Growth Retardation, Genital abnormalities, Ear abnormalities), with incidence estimates of 0.1-1.2 per 10,000 births [3]; and Treacher Collins syndrome (colobomas of the lateral lower eyelids, cataract, microphthalmos, atresia of lacrimal passages), with an estimated prevalence of 1 per 50,000 births [4].

Concomitant presentation of choanal atresia with intranasal cysts is rare. Importantly, however, this case highlights the need to investigate for choanal atresia, particularly in patients with a unilateral intranasal cyst, as they may first present to ophthalmology. Early liaison with ENT colleagues is encouraged, especially for patients with respiratory distress and suspected unilateral cyst to exclude an additional underlying cause of obstruction.