Angioid streaks (AS) on their own do not cause many problems, with the majority of patients remaining asymptomatic [1]. However, once choroidal neovascularisation (CNV) occurs, the visual prognosis of the patient rapidly declines [2]. Treatment is imperative to try and improve visual acuity, as without it patients can be rendered legally blind [1,3-5]. Treatment has proved difficult, with some treatment modalities exacerbating the condition, and others only having a short-term effect [1,4,5]. We present a case successfully treated with a course of anti-VEGF injections.

Our patient was initially referred to check for AS at the age of 15, when she had been diagnosed with Pseudoxanthem Elasticum. She was found to have bilateral AS, and remained asymptomatic until the age of 39. She then presented with visual distortion and deterioration in her left eye. Visual acuity was 6/5 bilaterally, anterior segment was normal as were both intraocular pressures (IOPs). She was found to have left macular elevation, left subretinal elevation and subretinal haemorrhages (Figure 1). An urgent fundus fluorescein angiography (FFA) showed CNV in the left eye. She was commenced on a course of three anti-VEGF injections in her left eye, with intervals of four weeks. 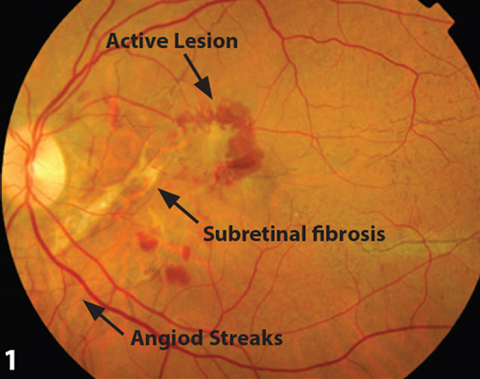 After treatment her vision improved by four lines on logmar, the sub-retinal fluid was resolving bilaterally, and there was evidence of sub-retinal fibrosis in the left eye. Changes in optical coherence tomography (OCT) and FFA are demonstrated in Figures 2-5. 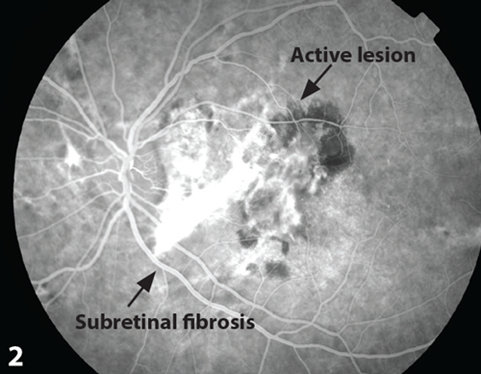 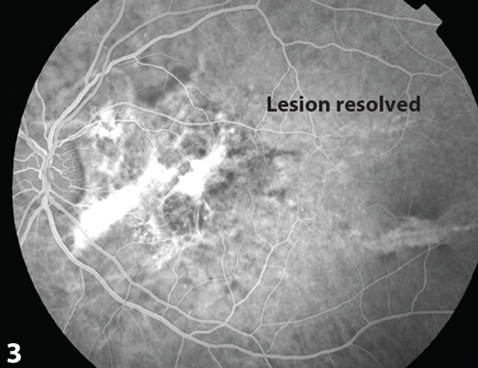 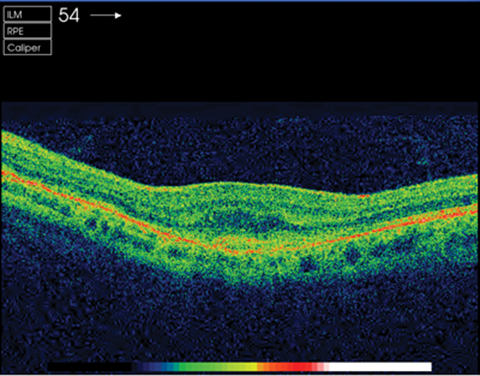 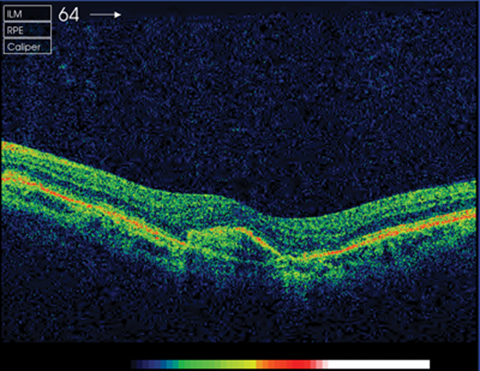 She remained stable for one year, after which she felt the vision in her right eye was deteriorating. Visual acuity remained at 6/6 in her left, and had marginally decreased in her right to 6/7.5. OCT revealed early thickening of the pre-retinal membrane in the right eye. She was later found to have early macular leakage on FFA and evidence of CNV. She has been commenced on another three injection course of anti-VEGF in her right eye, and it is hoped that vision in her right improves and remains stable, like that of her left.

Angioid streaks were first described in 1889 by Doyne, and named by Knapp in 1892, who suspected they were the result of vascular pathology [1,2]. It was later revealed they occur as a result of breaks in Bruch’s membrane, which is abnormally brittle in these patients [1]. AS is associated with numerous conditions, and is thought to have a familial component (our patient has a sister with AS, but no systemic association) [2,6].

The majority of patients remain asymptomatic until they develop a complication, the most common of which is CNV [1,3-5]. Between 72% and 86% of patients will develop CNV in one eye, with 71% going on to develop CNV in the other eye, after roughly 18 months [1,3,4]. CNV is thought to occur as blood vessels are able to extend through the breaks in the membrane [5] and without treatment the patients can become severely visually impaired [1,4]. However, treatment of CNV in angioid streaks has proved difficult (Table 1). Although numerous treatment modalities have been trialled, they have had limited success. Photodynamic therapy and photocoagulation have been shown to have short-term effects and high probability of recurrence. Macular surgery appears promising, but is a lengthy process with numerous complications [1].

The most promising treatment in these scenarios seems to be anti-VEGF. There are several papers looking at anti-VEGF in these patients, and it appears to be relatively safe, and is the most likely to both improve, and stabilise vision [1,3-5].

All patients with AS should be closely monitored. Patients complaining of distorted or decreased vision should be investigated, as this implies macular involvement. Treatment should be initiated to try and preserve vision, but even those treated with anti-VEGF, may have a guarded visual prognosis.