An 82-year-old frail lady was referred by her optometrist with a finding of subluxated implant in the right eye. She had uneventful phacoemulcification with in-the-bag intraocular implant 17 years earlier. There is no history of having had pseudoexfoliation (PXF) or glaucoma. There were no symptoms attributable to the subluxated implant. Corrected visual acuity (VA) was 6/9. Late spontaneous subluxation of in-the-bag intraocular implant was diagnosed. In view of the good visual acuity, lack of symptoms and the health of the patient, it was decided not to intervene. The causes and the management of subluxation of in-the-bag implants are discussed. 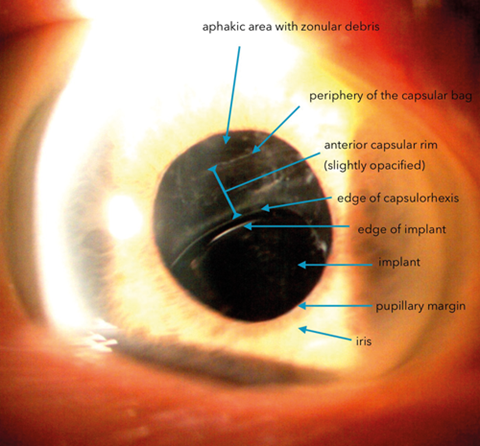 The patient was seen by the optometrist at routine examination. Corrected VA was 6/9. There was no diplopia, pain or distortion. Phacoemulcification with in-the-bag implant was carried out 17 years earlier by an experienced surgeon and there was no documentation of intraoperative complications. She was not found to have PXF or glaucoma. She had mild ocular hypertension in both eyes in the region of 24-26mmHg and did not require any medication for this. Last recorded visual acuities were 6/6 with glasses seven years after right cataract surgery. There was no history of trauma. She had YAG laser capsulotomy six years after cataract surgery. Examination showed clear cornea, deep anterior chamber and a regular round pupil.

The implant was found to be in the bag with posterior capsulotomy and the bag itself was subluxated infero-nasally. Intraocular pressure was 22mmHg. The anterior capsular rim was slightly opacified (Figure 1) and along the exposed equator of the bag were found pseudoexfoliation material. There was no evidence of capsular phimosis or presence of capsular tension ring. The small aphakic area in the periphery of the subluxated bag showed vitreous with what appeared to be degenerative changes. The retina was flat, disc and the macula were healthy.

The first report of late spontaneous in-the-bag subluxation of implant associated with capsular contraction was reported by Davison in 1993 [1]. Since then many series of subluxation or dislocations have been reported by several authors and are well documented [2,3,4,5]. This is defined as occurring three months or more after cataract surgery [6]. In our patient, subluxation was noticed 17 years after cataract surgery, but there was documented evidence of absence of subluxation six years after surgery. Commonest cause is PXF, previously existing and known or unknown or late onset. PXF is said to account for about 50% of the cases [6].

The other associated causes of zonular dehiscence are identified as advancing age, high myopia, uveitis, trauma, previous vitreoretinal surgery, retinitis pigmentosa, diabetes mellitus, atopic dermatitis, angle closure glaucoma attacks, and connective tissue disorders [6]. Marfan’s syndrome and anterior megalophthamos are other potential causes. The zonules can be weakened or damaged if the cataract surgery is somewhat difficult or carried out by inexperienced surgeons, due to increased downward movement of the cataract during phacoemulcification or due to excessive force during capsularhexis or dialling of the nucleus. In this case the operation was carried out by an experienced surgeon and no adverse incidents during the operation have been recorded. Late spontaneous subluxation or dislocation is said to occur with a cumulative rate of 0.1% after 10 years and 1.7% after 25 years [6].

Given more time, the subluxation may progress to become dislocation. This depends on the amount of zonular dehiscence. Intervention to stabilise the implant can be achieved by centralising and fixating the capsular bag to sclera using various techniques or by implant exchange using one of sulcus fixation, scleral fixation, iris fixation or anterior chamber implants, after removal of the bag with the lens if it is very unstable. These are all difficult procedures and may lead to intraoperative complications such as haemorrhage, vitreous loss and late events such as retinal detachment and cystoids macular oedema. Another option is to evaluate the indications for intervention with due consideration to the age and other factors and to observe the patient. Our patient was 82-years-old and frail. She had a VA of 6/9 with glasses in both eyes. She did not have any symptoms related to the subluxated implant. Therefore we decided not to intervene unless she develops any significant symptoms. 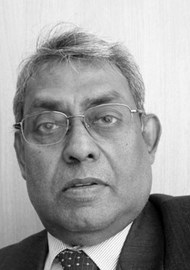