Professor of Ophthalmology and Interface Technologies

Tariq Aslam is Reader at the University of Manchester and a Consultant Ophthalmologist at Manchester Royal Eye Hospital. He specialises in medical retina, after having completed fellowship training for this at Moorfields Eye Hospital.

He has a doctorate (DM) from Oxford University which involved setting up clinical trials and assessing outcome measures. He has a more recent PhD from Heriot Watt University in interface technologies and computer programming for which he demonstrated ability to code in a number of higher level computer languages and was awarded the esteemed University MacFarlane prize as well as a Professorship at Heriot Watt. This second PhD in addition to his clinical training have afforded him capabilities of innovative and clinically relevant software programming, which have been applied to both device development and image processing algorithms.

His research explores many branches of ophthalmology, involving his clinical interests in retina as well as the general potential for computerised and technical enhancement of diagnosis and management of ophthalmic disease. He has around 100 peer reviewed publications, predominantly as lead author, a number of patents and is an investigator on multiple grants over the last 5 years in Manchester with involvement in commercial as well as with investigator lead studies.

His research has led to formation of a spin-out medical software company and he has recently been awarded a prestigious Manchester University prize for social impact, which is his ultimate research goal.

Professor Tariq Aslam lecture - 'Will a robot take my job?'

Eye News Co-editor Professor Tariq Aslam, from the University of Manchester, delivers his keynote lecture ‘Will a robot take my job?’ at the Eye News ‘AI and New Technology’ Symposium in Glasgow in January 2020. 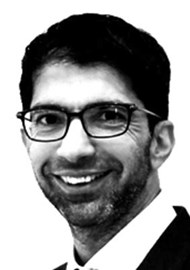